A Raw and Unfiltered Snapshot of Cypriot Life

This modern painting by the Cypriot artist Stass Paraskos encapsulates the everyday life of small towns in Cyprus.

Before analysing the painting, let’s talk about Stass.

Stass was born in 1933 in Anaphotia, a small town near Larnaca in Cyprus. He was one of six sons of a poor farmer. In 1953, he moved to England at the age of 20, and while there, through a chance encounter, he became swept up in the world of art and galleries. That led to him enrolling in the Leeds College of Art (despite not having any prior experience in the fine arts), and that marked the beginning of his artistic journey. So Stass spent the majority of his life studying, making, and teaching art in England before eventually moving back to Cyprus, to the town of Paphos.

Now, one of Stass early exhibitions actually led to a notorious court case in Leeds (in Northern England); what is today known as: The Stass Paraskos Obscenity Trial of 1966. At the time, it was such a scandal. At the exhibition, Stass exhibited a painting which included a rather sexual image (Lovers and Romances, 1966) which was seen as too obscene and which didn’t bode well with one of the visitors at the exhibition who immediately reported the inappropriate painting.

In the end, he was only charged 5 pounds, but the incident makes you think about what was considered to be too obscene, or too much in that time. This scandalous event ironically boosted Stass fame. He became known as the last artist in Britain to be successfully prosecuted for obscenity under the Vagrancy Act 1838.

Ok let’s take closer look at the painting itself…

This painting is figurative and non-naturalistic in style. In other words, Stass’s painting features recognizable forms (in this case human beings and a Cypress tree) but they have not been rendered in a way that reflects reality, or at least, our version of reality.

This painting is quite similar in terms of colour and aesthetic to the modern artists Stass looked up to, namely Henri Matisse and Paul Gaugin.

The painting is entitled: ‘Sto Paniyiri.’ The word ‘Paniyiri’ refers to a tradition that is very specific to Cyprus which I am going to try my best to explain and encapsulate. ‘Paniyiris’ are religious festivals, but they are also important social and commercial gatherings in the life of Cypriots. At a ‘Paniyiri’ you will normally have group demonstrations of the Orthodox Christian faith; but you will also always have street vendors selling food items, handicrafts, and other traditional practical and decorative items. Most importantly, ‘Paniyiris’ provide a social opportunity for the local population to meet and to interact, whilst celebrating and preserving the culture and customs of the Cypriot people.

And that is what is being evoked in this painting.

Now, in this painting there is definitely a sense of chaos, movement, confusion. How has Stass managed to evoke all these?

Well firstly, the canvas is overpopulated with a large number of figures, all of whom are engaged I a different activity. To the right, there is a mother and child engaged in conversation. At the top of the canvas, some figures appear to be dancing. In the middle left foreground, a figure holds what appears to be a handicraft item he has likely just bought, or is trying to sell.

This intentional variety of different actions really sums up the atmosphere of a ‘Paniyiri.’

Now the figures in this painting lack any features. Stass did not want to single out individuals in this painting, rather, he wanted to evoke a sense of a crowd, a large gathering of people. Stass was perfectly capable in rendering features; here, it was a conscious choice not to depict any.

Stass’s perspective in this painting is intentionally off; there is no sense of depth. Again, he is not trying to accurately copy or recreate a specific scene in a naturalistic way; rather, he is trying to evoke a feeling, an atmosphere.

The canvas itself is composed of blots of paint, there are no fine outlines. And that very much contributes to the sense of chaos, of movement. The figures actually appear to be blending into one and other. Like the trees themselves, they make up the fabric of the landscape. There is a figure in the bottom right, whose upper torso is the only element that has been rendered in the painting; the rest of his body disappears into the yellow background, thus enhancing a sense of movement.

This is just an impression of a moment.

Think about what happens when people move very fast; it’s almost as if their edges appear to blur, and I think this is what Stass is trying to evoke.

Most aspects of the painting are unclear, but I think that is the point. We are not meant to have clarity as such. We are just meant to get a sense of this chaotic moment that Stass has captured.

Now, pay attention to the colours in this painting. Look for example at the warm red tones of the figures’ bodies. This is an earthly colour; it evokes the colour of dust, of clay even. The background itself is a vibrant yellow, which again summons a degree of heat. These colours evoke the dryness, the heat, and the parchness of the Cypriot landscape.

I think we can all agree that this painting is an overload of all things Cypriot. It is a visual encapsulation of Stass’s knowledge and love for his country. He is providing us with an eternal snapshot of Cypriot culture, in all its glory.

So, I suppose you could label it a patriotic work of art…

This is Stass’s snapshot of everyday life in Cyprus, with no adornment, no filter.

I love Stass paintings because they are different; they are unforgivingly unique to his own personal visions. 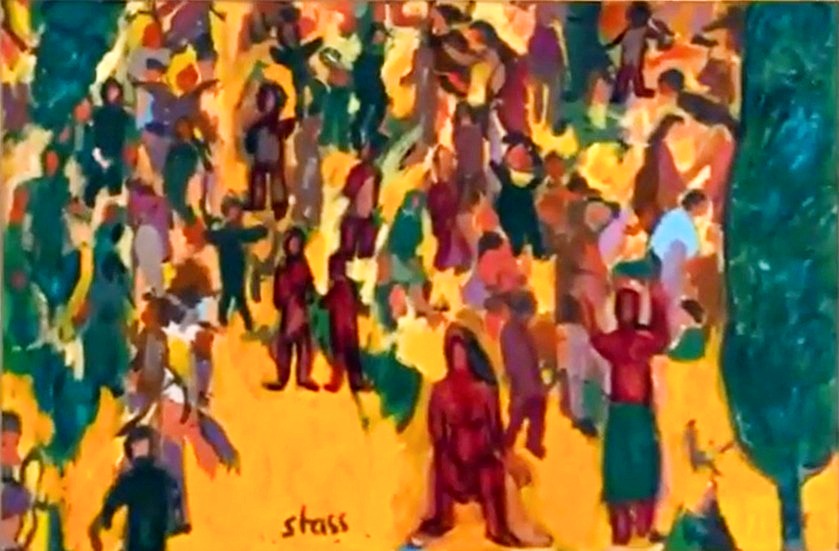 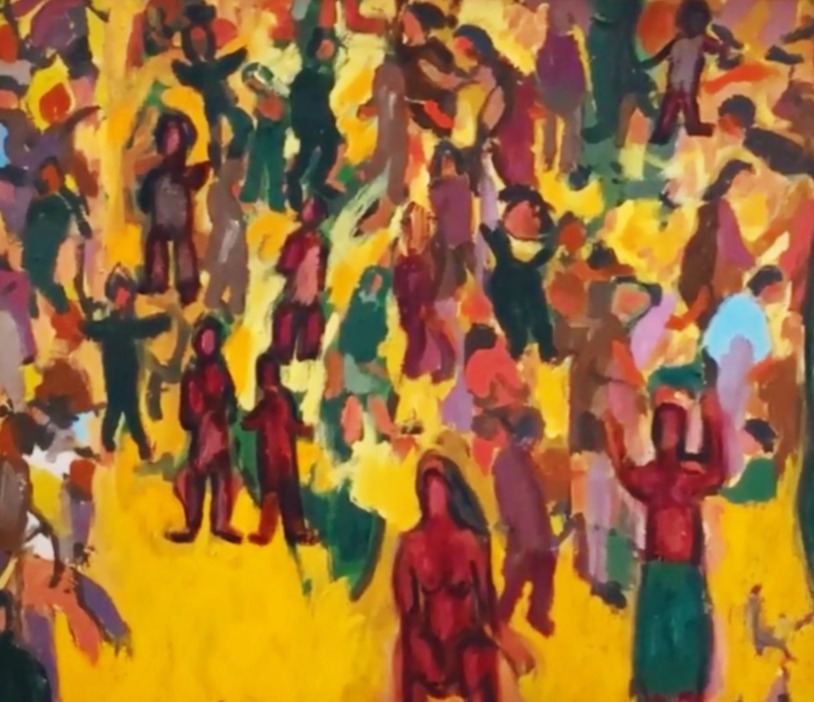 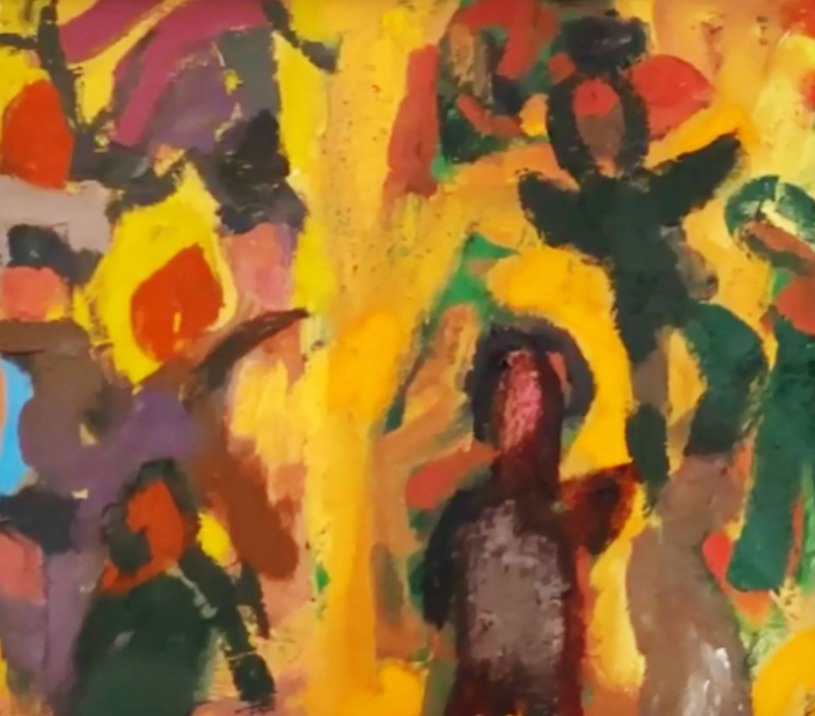 A Portrait of Self-Scrutiny...

Feast your eyes on this painting...